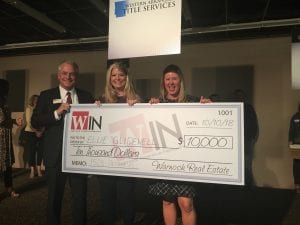 When I was a lot younger I heard people talking about “going with your gut” and paying attention to your instincts. Through the years I have come to believe that we all definitely have an inner voice that can direct us and clue us in on things, if we figure out a way to listen to it.

Sometimes the voice (I’m calling it a voice because I don’t know what else to call it) warns us not to do something. Other times it encourages us to make some kind of move. Then once in a while it can give us an impression of something that’s about to happen. I had one of those voices a few nights ago.

It seems like everybody I know occasionally has these gut instincts or feelings, and they don’t really come from a logical place. It’s just like something you know. That’s why it’s so weird and why people might think you’re a little crazy, like Ellie did on October 10 at the Warnock Real Estate Party.

(If you think you’re about to hear that I had a premonition of the building collapsing during the party and was able to get everyone out safely, or that I had an instinct to go talk to some guy and ended up making a million-dollar deal, you’re going to be disappointed. But what did happen was pretty cool and mutually beneficial.)

Warnock has this promotion where each year they draw the name of a real estate agent who brought a buyer into a successful deal for one of their listed properties. That agent wins $10,000. The money is generated from Warnock’s sellers, who agree to contribute $250 of their sale price toward the prize. The benefit for the sellers is they know many more buyers’ agents will show up at their homes with buyers, because all you have to do to get your name in the hat for the $10,000 is close a deal on a Warnock-listed home.

(Sorry if this is getting long. My gut instinct is saying to figure out a way to shorten it, but I don’t have time.)

Anyway, we were at the party with about 40 other people, 27 of whom had sold a Warnock property the previous year and were in the running for the money. Ellie was one of them.

When they were getting ready to draw, I said to her, “You’re going to win this thing. You’ve got it. It’s yours.” She rolled her eyes at me like she always does when I say something weird. But inside I just knew she was going to win. I have no idea how I knew it, I just did.

And she won. No more eye-rolling then as she got the oversized cardboard check for $10,000. I think I was more shocked than she was. I was shocked that I knew she was going to win. We went out to eat with a friend afterward, and we decided Ellie should carry her big check into the restaurant, just to celebrate.

After the meal, when our waitress brought our check, I realized I couldn’t just leave a $10 or $15 tip – not with Ellie carrying around a check for 10 grand. So I gave the girl a $100 tip. For a minute I thought this is probably how Warren Buffet does it when he goes out to eat. Then I thought some more and figured, no, Buffet probably doesn’t throw around hundred-dollar tips and saves his money instead – which is how he became Warren Buffet.

Well, when the waitress realized I gave her $100, she ran over and hugged me and was all emotional and said that her checking account was in the red and this money would put it back in the black. She was so happy. And that made me very happy.

Then I got to thinking about a scholarship fund I’ve been wanting to start at the University of Arkansas. And I knew now was the perfect time to do it. I (well, Ellie and I . . . okay, Ellie, but we’re married, so it all goes in the same pot) had just received a nice money prize, so it was the perfect time to pay some of it forward, as the saying goes. So that’s what I’m going to do.

I have two points with all this. One, listen to your gut feelings. You may not always win $10,000, but your instincts can direct you to the place you need to go in many cases. And two, when something good happens to you, don’t delay in letting some of that good go out to do something good for someone else.

Now my gut instinct says I better get back to work, because that $10,000 isn’t going to last forever.